Oh gin, you are the world! 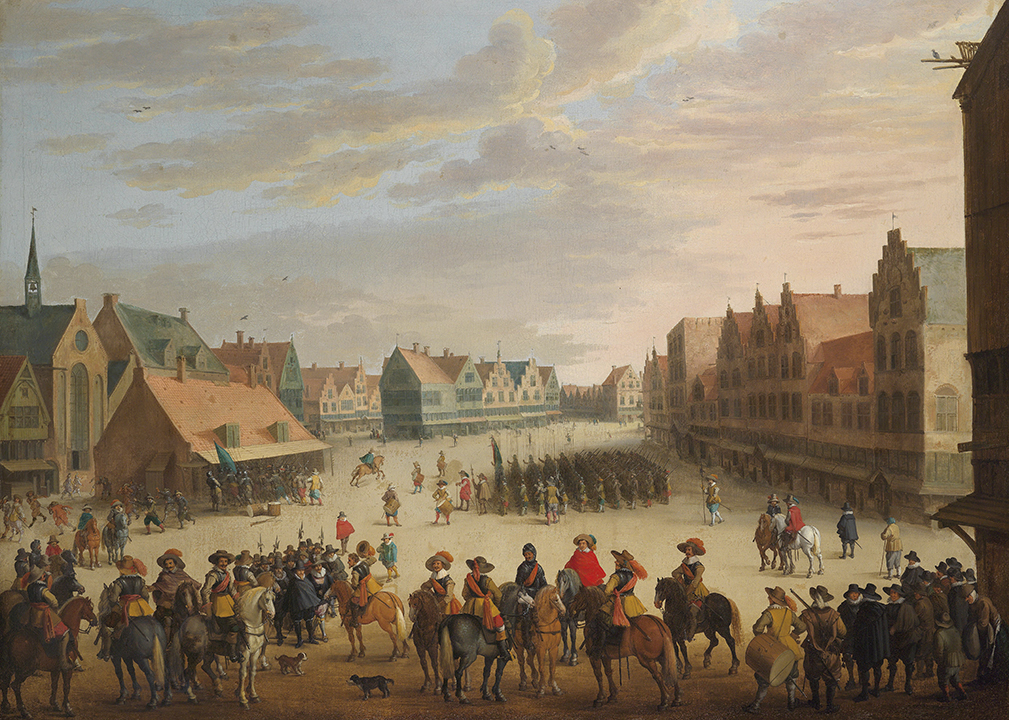 A creation with the Arab roots, but not a genie. A plague remedy. Doping for soldiers. A threat to the existence of Great Britain. A malaria medicine. And finally, countless variations, manufacturers, arguments over the origin, and culturally renowned drinks. All this is gin.

Let's see how all of the above manages to coexist in one drink.

The first distillation is believed to be invented by the Arabs. In 8th century, two smart guys named Jabir ibn- Hayyan and Al- Kindi experimented with distillation as a method of producing alcohol. The next move was for the medics.

In the 11th century, the famous physician Constantin the African founded the School of Medicine in Italian Salerno, which for the next three centuries became the main source of medical knowledge for Western Europe.

As you probably have already guessed, moonshine flourished with might and main within the walls of the School. According to historical documents, the African and his colleagues learned about alcohol distillation from the Moors and experimented with it, making alcohol a base for various herb medicines. Juniper, which grew in abundance in the hills near Salerno, was widely used as a component.

The experiments of those guys from the Medical School were creatively continued by alchemists and monks in the 12-13th centuries. They experimented with herbal extracts and tinctures all over Europe in search of the “water of life”.

Note that juniper was then included in many medical recipes because of its diuretic properties. Therefore, its tinctures were widely used to treat diseases of the stomach, liver and kidneys.

During the Great Plague of the 14th century, which destroyed up to a third of the Europe population, liqueurs and tinctures of juniper were extraordinary popular, since the berry was believed to save from diseases. The belief in the anti-plague properties of evergreen coniferous shrubs and trees of the Cypress family was so great that the famous plague doctors filled their masks with juniper berries. 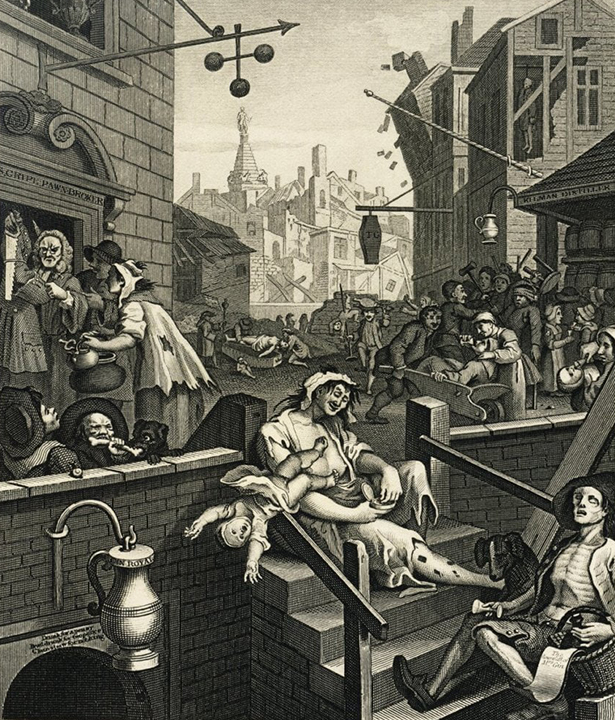 The debate about who made the first gin continues to this day. A recipe for a herbal drink based on distilled wine containing nutmeg, cinnamon, galangal, clover, ginger, sage, cardamom, and juniper is mentioned in the Dutch book “Making Burnt Wine” written in about 1495. The word “jenever”, which was later reduced to the British “gin” was first mentioned in 1552 in a doctor – moonshiner’s handbook of a sort.

Similar drinks were made in Flanders, Belgium, and Northern France. The production of a double-distilled product from grain mash with juniper, anise, caraway seeds, coriander and other components became a popular business by the middle of the 17th century. In 1663 around 400 manufacturers were doing this in Amsterdam. Jenever was used for kidneys, arthritis, stomach problems, dissolving gallstones and as a gout remedy.

During the Eighty Years War (also known as the Dutch War of Independence) with Spain, the Dutch used to drink jenever before fighting. It was from there in particular that the term “Dutch courage” came, implying the need to get hammered for additional bravery.

During the 17th century gin in various forms appeared in England, but it only gained popularity and was widely distributed after the accession of the Dutchman Wilhelm III of Orange on the throne. The new British monarch began his reign with tough protectionist measures. In particular, Wilhelm sharply raised taxes on French wines and cognacs to weaken the French economy. At the same time, the king issued the Grain Laws, which in fact allowed the distillation of grain brew to anyone willing. A there were many of them ready to join the business!

English consumers accepted gin with enthusiasm. Why? Because the average European hardly ever drank clean water, since there were few sources of it, as rivers served as a place to discharge all kinds of waste. At the same time, well-filtered alcohol turned out to be a good help against all kinds of infection.

The reduction in distillation taxes and the abolition of licenses led to the further spread of home moonshining. A brewer usually needed a decent-sized room for their needs, while a moonshiner managed a small workshop. Again, barley was cheap in England. Its quality did not always meet the requirements of brewers, but it was perfect for distilling gin. In some cases, the juniper was replaced with turpentine, or even sawdust, to give the drink that very smell of the Christmas tree. As the result, a pint of gin was cheaper than a pint of beer. This was how Gin Fever began! According to Daniel Defoe, gin was served in more than half of the 15,000 entertainment establishments in 1727 in London.

Both the lower classes of society and the aristocracy drank it. Regular gin and ginger fairs appeared in 1731. As soon as the English weather began to show its hideous character, Londoners flocked to the Thames to pounce on hot gin and gingerbread. Since most of the business took place in winter, such fairs became known as “London Frost Fairs”. By 1730, gin consumption in London had risen to two pints per person per week. De facto, the product of moonshine turned into a kind of super-cheap drug for the British. 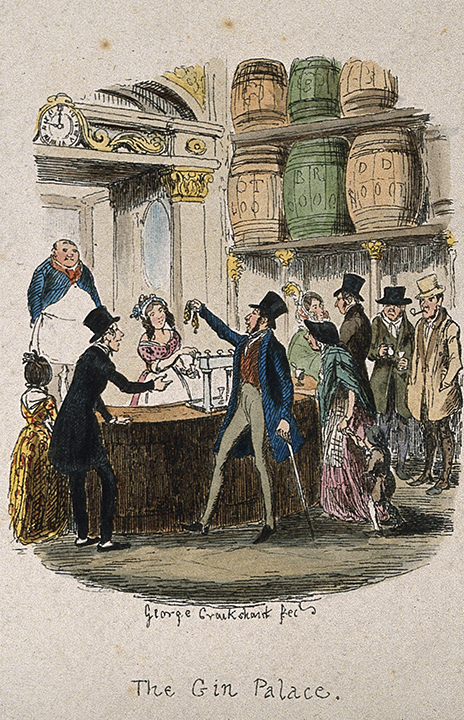 Negative aspects of mass consumption of low-quality drink began to appear over time. Officials directly accused the gin sellers of the fact that the crime rate in the country increased significantly due to their stuff. Some of those in power even went so far as to elevate gin to the rank of a national threat!

In 1736, the British government issued the Gin Act, which taxed each manufacturer (20 shillings per gallon) and required a license fee (approximately £8,000 a year in today's money).

As expected, this law was not meet with enthusiasm by the majority of the British and even led to riots. Sighing heavily, the government cut taxes and the cost of gin license in 1743. The “truce” between gin producers and consumers on the one hand and the UK government on the other did not last long. Already in 1751, the latter ambushed the former with a new Gin Act, in which unlicensed traders were forbidden to sell gin, and licensed ones were heavily taxed. In response, the furious British gin-lovers hinted that they were ready to tear their own government apart. Realizing that the problem could not be solved head-on, the government switched to a cunning tactics - an advertising campaign was launched in the UK promoting the replacement of gin with beer and tea imported from the colonies. 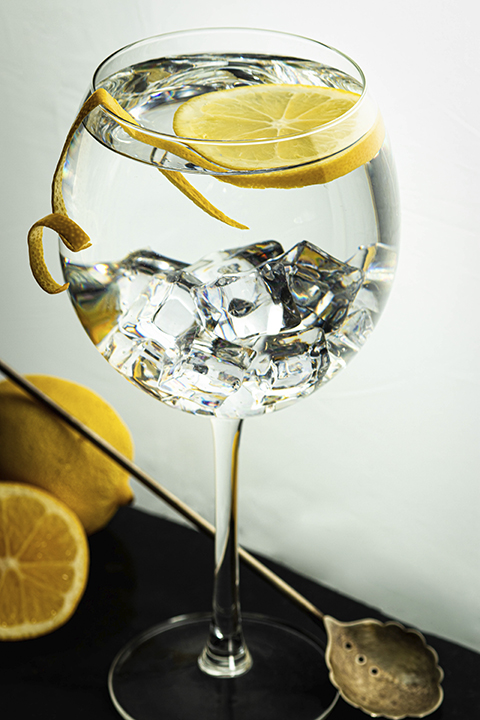 Echoes of the aforementioned war with the gin can be found in the phrases “gin mills” and “gin joints” - both meant bars of bad reputation. Such terms as “gin-soaked” (heavily drunk) and “mother’s ruin” come from the same glossary. Interestingly, these same derogatory phrases acquired positive connotation much later, and bars started using them to attract patrons.

In 1832, a real revolution in gin production took place, when a rectification column was invented. This made it possible to produce pure alcohol from a variety of raw materials and led to the creation of the classic gin in its modern form. A feature of the production of London dry gin was the use of citrus raw materials, lemon peel, bitter orange, with the addition of anise, violet root, licorice, almonds and other spices.

In 1890, the production of transparent glass bottles was established, and the gin producers immediately took advantage of this to demonstrate the purity of their drink.

In the 19th century, Great Britain faced a rather unpleasant disease - malaria. Cinchona bark extract, with a very characteristic bitter taste was used as a treatment. To soften the taste, Schweppes company came up with the idea of adding quinine extract to soda water. In turn English sailors immediately thought of mixing the drinks, thus creating a classic gin and tonic. Lemon was often added to it as a scurvy remedy. Hence the British sailors got their contemptuous nickname “limeys”. 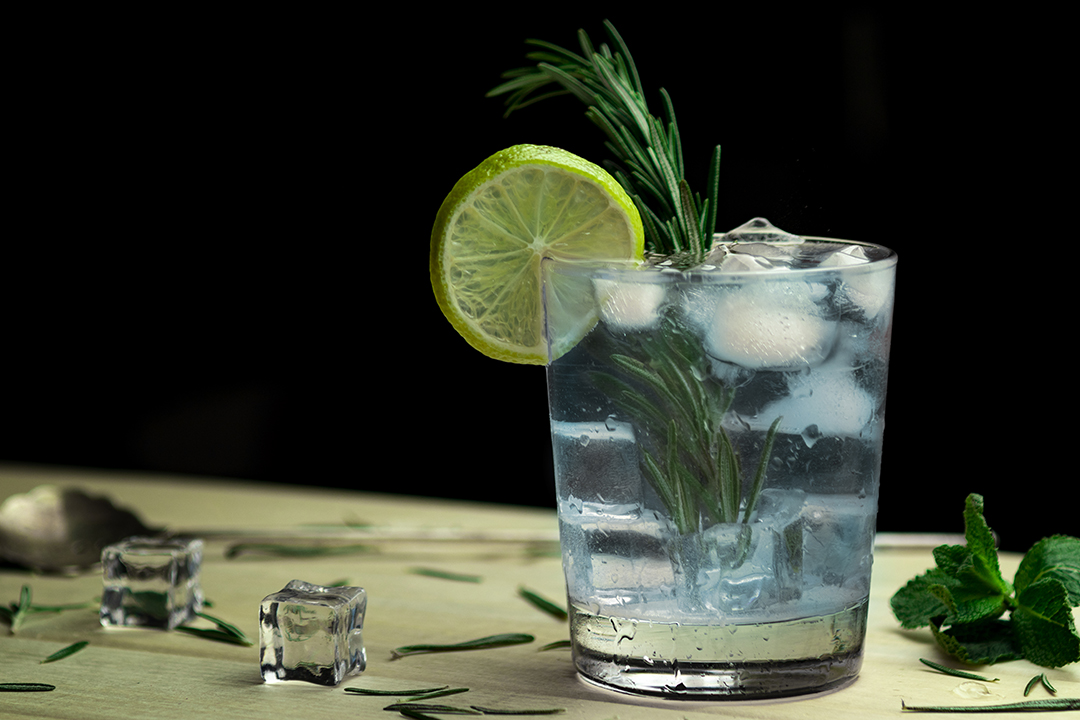 At the end of the same 19th century, gin began to gain popularity among bartenders. But the real era of cocktails began in the early 20s of the next century, when the Martini cocktail aperitif appeared, which recipe contained Italian vermouth in addition to gin.

A relative ease of illicit gin production during the notorious “Prohibition” in the United States made Martini one of the most popular American cocktails of the 20th century. Of course, it was not the only one on the list of the International Bartenders Association (IBA). By 1951 there were already about 7000 gin-based cocktails there! However, in the 50s gin began to lose popularity. Gradually, it turned into a “drink for the elderly” and Russian vodka took its place on the bar pedestal.

The gin renaissance began in 1999, when the famous whiskey company William Grant and Sons launched the Hendrick's Gin brand on the market with loud advertising fanfare. The success of this Scottish gin inspired other manufacturers of similar products so much that by 2017 the gin took revenge on vodka, confidently overtaking it in popularity. The story of the gin, of course, did not end there. As the demand for gin continued to grow, many small producers of the old-fashioned drink entered the game along with the large enterprises.